As I am sure most bloggers do, every week I spend a large proportion of my spare time browsing social media and visiting others people’s blogs. I have learnt over the last six months that the blogging community is a friendly and welcoming place and have found that this browsing habit brings with it both inspiration and affirmation in equal measure.

One such affirmation this week has been the overwhelming need to slow down and enjoy life. In a recent post the lovely Lucy Heath at Capture by Lucy reflected on the idea of ‘slow living’ and a new pace of life which has offered moments of calmness in a busy schedule and lots of extra happiness. Alongside this some random Facebook browsing unearthed a HuffPost article by Rachel Macy Stafford entitled ‘The Day I Stopped Saying ‘Hurry Up’. This retold the moment the author was inspired by her thoughtful, observant child to slow down so that she could enjoy life more.   These pieces mirrored a feeling that has also developed in me over the last few years, where life events have taught me that I need to slow down, live life more positively and appreciate the everyday moments which bring me happiness.

After a busy couple of weeks and the feeling I might be coming down with a cold, a few days living life in the slow lane were exactly what was needed this weekend and so some sourdough bread making was on the cards.  Baking sourdough is most definitely a bread experience which requires patience but is certainly worth the wait, as the loaf produced has a flavour of its very own which, with every bite, makes you feel like you are eating the ‘real’ thing and makes you realise the lack of any flavour found in commercially produced loaves.

How inviting does this loaf look?

My love affair with this distinctively flavoured delight came about as a result of Mr B’s weekend routine of rushing to our local supermarket to get one of their few loaves and often returning disappointed.  I therefore decided that for his last birthday I would give him a sourdough starter (purchased from Hobbs House Bakery online). This to most would probably seem like a fairly odd gift to give to their husbands but not for Mr B, he was delighted to receive it and couldn’t wait for the first loaf to be produced. It has been almost a year since then and during this time I have made a loaf most months and through this routine have learnt a lot about this artisan form of bread making. 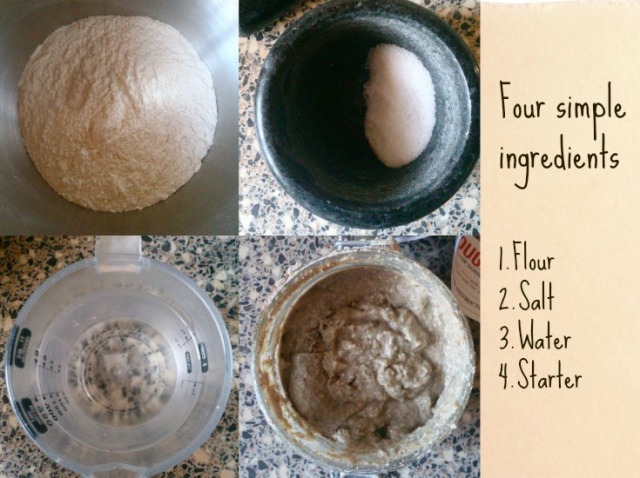 The magic of a sourdough loaf is that it is produced with only four simple ingredients – a starter, flour, water and salt.  It is the starter which is the star ingredient, the simple addition of warmth to a flour and water mixture encourages the production of natural yeasts (which give the loaf its rise) and bacteria (which give the loaf its distinctive flavour).  The dough rises slowly when using a starter as opposed to the ‘fast acting’ dried yeast used in most loaves, however it is worth the wait.  In total the production of a loaf, from feeding the starter to taking the first bite of a freshly baked loaf, is around 24 hours.  This may sound like an arduous amount of time, however the involvement of the baker in this time period is less than an hour as their only task is to produce the dough. Prior to this the starter has been fed with some additional flour and water to reinvigorate it after its incubation in the fridge (where it lives between loaves) and then it rises slowly for up to twelve hours before being baked.

It has been my mission over the last year to produce a perfect loaf and finally this weekend I think I may have finally achieved this (or certainly got the closest I ever have). Over the months I have been making sourdough bread I have tweaked the original recipe and adapted the technique through trial and error (as well as some well-founded research).  This seems to have all paid off as the loaf which emerged from the oven on Saturday evening could only be described as ‘stupendous’, a golden delight whose crust was a crispy coat surrounding the precious flavoursome loaf inside. Spread with butter whilst still slightly warm it was heaven on a plate and soon between Mr B and I almost half the loaf had disappeared.

Steps to success with sourdough

I’d recommend to anyone who has not tasted sourdough to give it a try, at first it’s tangy flavour is a little overwhelming but once the taste buds have adjusted it is such a delightful loaf which leaves others in its wake.  If you’re interested in attempting to bake your own, I’d definitely encourage you and to give you a helping hand I would love to share with you what I have learnt in my journey to a perfect loaf.

Good luck with your sourdough adventures, I’d love to hear about your successes and any tips you have for creating your perfect loaf as I am sure there is still more for me to learn.

A home for cooking and baking recipes

From Strength to Strength
My Thrifty Life by Cassiefairy

Inspiration for living a lovely life on a budget

Adventures in dressmaking from an improving sewist!